As many of you know the sad news of the passing of Dick Edney a long time member and committee member of the club, here are a few words from some of our members and a lovely collection of photos of Dick…

Dick was a very early member of the LL Club but drifted away for a time then came back on board running the club magazine for a number of years also taking over the Chairmanship, again for a number of years, finally being publicity officer.
Dick and I first came across each other at the Blackmoor rally, then at the Midhurst Steam Rally where the LL club got involved with Buxworth Steam, after that the club ran another rally at Cowdray. At this time Stansted House wanted to put their estate on the map so the club under Bill Tull were asked to take part, T.M.S. (Dick) was engaged to do public address so an eventful association started, originally on the lawn in front of the house, it grew and had one of the best reputations for a family friendly rally around. He got caterers and tents for the rally, Dick was not an early morning person so he would always close the entertainment down at night and then Martin and I would be up early to greet the exhibitors and stallholders. In the height of rally organising I could ring Dick up till very late at night. After Stansted we tried to find another venue, Pump Bottom Farm and Brinsbury were tried but for various reason did not take off.
One of Dick’s earliest memories of me was when I helped run a rally at Stocklands at Liphook, I borrowed a horse box to carry club stuff and sleep in. Dick and Jean had an old caravan which they named brown owl (it was brown) which he would tow with his van, alright till the tow bar failed one day, well it was made of wood.
Where as I collect junk, Dick collected cars and at one time had them at various garages around the area. His relationship with the Late Ted Baverstock saw him build an Austin seven special and on taking it to the Beaulieu Museum show won prizes. Just before his demise he was still restoring a car and wished to get back out in his garage to finish it off. When Dick met Jean he took on her three daughters and at a birthday party they said how good he was as a father to them, also Nicky was supported in his drumming career.
Dick also was into amateur radio and also collected early portable radios. His favourite drink (non alcoholic) was Camp coffee and in our caravan and at home we always had a bottle, this lead to another collection of Camp Coffee artefacts and memorabilia.
He had a stall at the Grange Auto Jumble and then helped taking the money at the entrance, because he new a lot of the customers his queue was always slower he chatted with everybody.
I know he had good stories about me, we went to a  show, and we all had omelettes the others decided what type they were having, so I asked for an egg omelette, this sent the serving girl into a tizz as they did not do egg omelettes. As many of you of you know I have the ability to fall asleep anywhere and Dick could never understand how when playing scrabble I could nod off then wake up and have my go and win the game.
Memories of Dick include Tilly lamps, which Jean did not share his enthusiasm, Camp Coffee, gatherings with Gordon and Cath Cobbold, and Sid Sheppard with a tarpaulin stretched between the caravans to keep the rain off, him moaning at me for recycling last nights charcoal for the breakfast Bar-B-Que, he mounted a piece of charcoal on a plinth and presented it to me.
One of Dicks vans had a squeaky fan belt so you new it was him coming to committee meetings at the Grange, the engine went wrong and was replaced, guess what, the new one squeaked as well.
When the then Lord March decided to bring racing back to the Goodwood motor circuit he had an idea to have an event on his lawn in front of the house with a hill climb, Dick started to do the Public address, this has now ended up as the largest motoring event in the world, when he became ill I gave him a hand to clear up, I helped two others wind up cables for a day, that’s how big it had got. Likewise when the circuit opened Dick and his crew set up all the speakers for the race track, for virtually a one man band he had two world class events in his C.V.
He also did Pendean fete both ends of the business, Queen Elizabeth Auto Jumble, Lodsworth and Rogate fetes and many more, tales of him trying to put lights in marquees that were not put up. Another memory on days out was him saying “God, Rudwick you are tight”, just because I wanted to buy a small cake and cut it into four, to save money.
It was good that Dick’s last days were in Pendean and Jean was able to stay as well, not in hospital where it was noisy and I would have to pay to park!! he would have liked that.
God bless Dick, rest in peace.
Dave Rudwick (Daisy).

It is with heavy heart that I have to write about Dick’s passing, we knew that he had been unwell for sometime, Dick and myself had known of each other back to when he was working in Bognor & Chichester and I was an Electrician in North Bersted but it was through the Double LL Club that we really became friends, I remember when I needed a part for one of my old cars Michael Sedgwick said go down to Birdham and see Dick who at that time was running a spares workshop and yes he had the part I was looking for.
Also when we moved our business to North Street Midhurst we had people coming into the yard having a look around, so I contacted Dick and he installed a surveillance camera, and a beam detector and that put a stop to that.
Over the last years both Dick and myself had things wrong with us and we used to swap stories as to how each other was making out this was always light hearted banter, it would always start with hello Robert my reply was hello Richard I see we are both still upright, how are we both today.
We all know that Dick spent his final days at Pendean where he was looked after with so much care and love, so it was a great privilege to me when Jean said that Dick would like to see you after the Fete, thanks to David this happened I spent almost an hour with Dick and we had the usual banter as always but this time more subdued, we tried to work out the view out of his room towards the Downs and decided that it was to the left of the Trundle, we talked of course about his cars and what would be the best for them, also of times past and the little sayings we used to share, most of course was of a private nature.
It is so sad that Dick had to endure such a terrible illness but this was dealt with such great courage and I will always remember that.
Thank you Dick for being a good friend to me and thank you for all you have done over the years for the Double LL Club. I don’t know how many cars that need repairing up there but I am sure you will carry on doing just that.
Toodaloo old friend.
Robert (Bob) Lintott  (President  Double LL Club)

A good friend for many years, we both had a keen interest in Austin Sevens supplying each other with parts and info to keep them going.
Reminiscing of an Austin 7 Autumn Amble in 1997, we had stopped at the half way stage at the Seven Stars at Stroud. When we were about to leave Dick noticed he had a flat rear tyre we all got together and the wheel was changed. Off we went Dick and Jean in the Lea Francis Ted Baverstock with Bob Elliott in the Morgan And I followed with Keith Elliott in the Austin 12 all ending up safely at The Royal Norfolk Hotel Bognor Regis. Great Days.
Dick was an early Club member, served on the Committee as Chairman, also was editor of the Newsletter with Jean for many years and lastly as the Publicity Officer.
We will all miss the TESTING – TESTING 1-2-3 echoing around the rally field.
Derek, Val & Ruth. 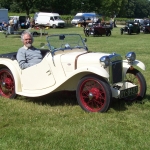 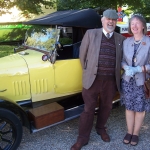 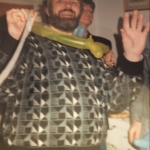 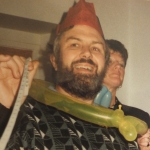 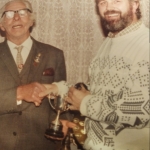 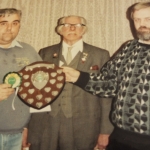 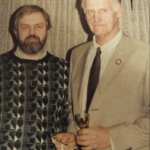 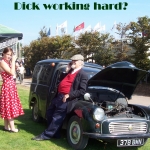